“No eye has seen, no ear has heard, no mind has conceived what God has prepared for those who love him.” (1 Cor. 2:9)

Recently I have found myself reflecting on the realities of heaven as I have prepared messages for my brother Ronnie’s funeral in January, followed by my Aunt Carolyn in February. One of the most encouraging aspect of such messages is reflecting on the present reality of a loved one whose destiny is heaven. And yet, while God’s Word is very clear about the certainty of death and the reality of heaven, there is much that remains a mystery.

And so that leaves us with a natural curiosity about what heaven will be like – what will it look like, what will we do there, will we know our loved ones who have gone there before us? As I sat at my brother’s bedside on the night before he passed, I browsed through his iPad and noted the books that he had downloaded. As best I could tell, there was only one that he had actually completed – Randy Alcorn’s book titled “Heaven”.

God’s Word gives us glimpses of heaven, but it leaves us thirsting for more. But I don’t believe there is any experience or sight here on earth that would give anyone the ability to adequately describe heaven. As Paul said in the verse above, our eyes have not seen, our ears have not heard, nor has our mind even conceived what it will be like. In 2 Cor. 12:4, Paul talks about being “caught up to paradise” and hearing “inexpressible things, things that man is not permitted to tell”. The apostle John makes his best effort to describe his visions of heaven in Revelation, but I believe we’ll discover one day that his words fall woefully short when we experience it for ourselves.

It’s like those photos we take that never truly capture the wondrous beauty of God’s creation here on earth. Traveling around the country, I have had the privilege of seeing some of the most beautiful sites imaginable. I have had my breath taken away standing at the rim of the Grand Canyon, gazing on fresh fallen snow at the top of the Continental Divide in Rocky Mountain National Park against the backdrop of a crystal 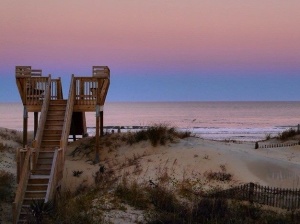 clear blue sky, spending a day on a perimeter island just outside Nassau with the whitest sand and bluest water I’ve ever laid eyes on, and taking in a sunset at Oregon Inlet on the Outer Banks here in North Carolina, surrounded by a flood of lavender and pink hues. These also serve as glimpses of heaven here on earth. But as awe-inspiring as those scenes were, I know they are poor reflections of the reality of heaven.

In recent years there has been a flood of books written by people who have had near-death experiences, claiming to have gone to heaven and returned. One of those books, “Heaven Is For Real” was even made into a movie. I have read a number of them and enjoyed the movie. But while I am intrigued by the experiences they attempt to describe and encouraged by the similarities between their accounts, I must confess to a certain skepticism over their claims. We’re drawn to them because we want more detail about what heaven will be like. For many of us, perhaps we want eyewitness assurance that heaven truly is “for real”. But the only truth we can count on concerning heaven is the truth found in the pages of God’s Word. And that reality as described by God’s appointed eyewitnesses is indescribable, inexpressible, and even unimaginable.

A very common concern people express about heaven is whether or not we will recognize each other there. There is Biblical evidence to support my belief that we will know each other, in spite of the fact that Paul says in 1 Cor. 15:44 that our bodies will be “raised a spiritual body”. Many people recognized Jesus after His resurrection. At the Transfiguration, Christ’s disciples recognized Moses and Elijah, even though they could not possibly have known what they looked like in their earthly bodies. A great source of comfort when we are grieving over the death of a loved one is the assumption that we will join them there one day in a great family reunion. And I firmly believe the glimpse of an afterlife reunion as described by Paul in 1 Thess. 4:14-18 justifies that assumption.

Shortly before my mother died, several of us were sitting with her in her hospital room before she was moved to hospice. She kept pointing at invisible people she claimed to see there in the room with us and calling them out by name, seemingly incredulous that we couldn’t see them as well. This went on for a couple of days. I’ve since learned that this is a more common experience than I realized at the time. Many believe these experiences are nothing more than hallucinations caused by certain medications. But I couldn’t help but notice that she didn’t “hallucinate” seeing anyone who was still living!  I believe loved ones were already starting to welcome her home.

From our perspective here on earth, the thoughts of being reunited one day with our loved ones is surely our greatest source of comfort in our grief. But I believe when the Lord calls us home, that perspective will change immediately. Some may debate whether we will know each other in heaven, but there should be no debate that we will know our Savior. To comfort His disciples on the night before His death, Jesus told them that He was going to His Father’s house to prepare a place for them, that where He would be, there they may be also. (John 14:1-3)

While John no doubt struggled with words to adequately convey the beauty of heaven and the exhilaration of being there, he was very clear about the overwhelming presence of our Lord in Rev. 22:1-5, saying that we will see His face, His name will be on our foreheads, and the Lord Himself will be our light. Paul says in 2 Cor. 5:8 that he “would prefer to be away from the body and at home with the Lord.” In his letter to the Philippians, Paul proclaimed that “to die is gain” because to depart and be with Christ is “better by far”. (Phil. 1:21,23)

I’ll close with one last illustration involving my mother. A few years after her death, I dreamed of her one night. It remains the only time I’ve dreamed about her since she went home to be with the Lord ten years ago. In that dream she was in her spiritual body – she looked nothing liked she had looked in life. And yet I knew her instantly. I often have trouble remembering the details of dreams, but that one was very short and her words to me were very clear and memorable. She said “Wait till you see Jesus! You won’t believe His eyes!”

As I’ve pondered that experience through the years, I’m increasingly convinced that it was no dream at all. I believe the Lord allowed her to visit me briefly and deliver that poignant message- a message that I have often shared with others who are grieving. It was not lost on me that she said nothing about how beautiful heaven was or who else was with her there. Being with Jesus overshadowed everything else. It is perhaps the most memorable glimpse of heaven I have ever experienced. What a blessing it is to know that because of her faith in Christ, she is basking in the presence of our Lord. The comfort of His grace she now knows face to face.

Until next time, may the grace of our Lord Jesus Christ be with you all.

“For our light and momentary troubles are achieving for us an eternal glory that far outweighs them all.” (2 Cor. 4:17)

Note: All Scripture references are taken from the New International Version (NIV)

3 thoughts on “Glimpses Of Heaven”