“Make a joyful noise to the Lord, all the earth; break forth into joyous song and sing praises! Sing praises to the Lord with the lyre, with the lyre and the sound of melody! With trumpets and the sound of the horn make a joyful noise before the King, the Lord! Let the sea roar, and all that fills it; the world and those who dwell in it! Let the rivers clap their hands; let the hills sing for joy together before the Lord, for he comes to judge the earth. He will judge the world with righteousness, and the peoples with equity.” (Psalm 98: 4-9 ESV)

It is certainly one of, if not the most, well-known Christmas carols. Most of us learned it at an early age and will sing it at least once during this Christmas season. As the Grinch would say, “It is both joyful and triumphant!” It captures so well the awe, wonder, and exuberance the shepherds must have felt that fateful night when an angel of the Lord appeared and announced “Today in the town of David a Savior has been born to you; he is Christ the Lord.” (Luke 2:11 NIV) 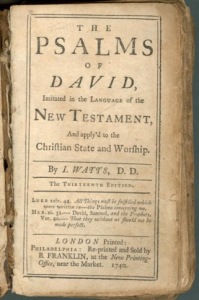 That is the image it brings to mind when we sing Joy to the World. However, it is not the image Isaac Watts had in mind when he wrote that familiar song. It was originally published in his 1719 hymnbook titled The Palms of David: Imitated in the Language of the New Testament and Applied to the Christian State and Worship. How’s that for a catchy title?

Like many young people today, Watts found much of the congregational singing in the England of his day very uninspiring and lacking in passion. He once remarked “To see the dull indifference, the negligent and thoughtless air that sits upon the faces of a whole assembly, while the psalm is upon their lips, might even tempt a charitable observer to suspect the fervency of their inward religion.”

Seeking to energize congregational worship, Watts set out to write hymns based on the Psalms “in such a manner as we have reason to believe David would have composed them if he had lived in our day.” Some have called Isaac Watts the Chris Tomlin of his day.

Watts composed the words of Joy to the World based on Psalm 98, specifically the verses cited above. If you focus on those familiar lyrics, you can’t help but notice that there is no mention of those scenes and characters we all know so well from the Christmas story as told by Luke. That is because Watts wrote the lyrics of Joy to the World with the Second Coming of Christ in mind, rather than his birth.

As I have prepared my heart for Christmas this year, I have found myself focused on the return of Christ perhaps as much as his birth. Several years ago, I began the practice of reading a different gospel account each month while continuing to read through the rest of the New Testament every six months. Following this schedule means that each December, I find myself both in John’s Gospel and in Revelation, John’s account of Christ’s return.

The combination of those two books of the Bible remind me that I live between two world-changing events – that of Christ’s incarnation, death, and resurrection and of his promised return to gather those of us he died to save. As we celebrate his birth this year, may we be equally as anxious and prepared for his promised return, just like a child on Christmas morning. Like Watts, may we long for that glorious day when the nations will indeed “prove the glories of his righteousness and wonders of his love.”

May each of you enjoy a Christ-filled and Christ-focused Christmas this year, celebrating his birth while anticipating his glorious return.