“My message and my preaching were not with wise and persuasive words, but with a demonstration of the Spirit’s power, so that your faith might not rest on men’s wisdom, but on God’s power.” (1 Corinthians 2:4-5 NIV)

Upon hearing the news last week that Billy Graham had died, my mind immediately took me back to my childhood when I first heard his clear prophetic voice declaring the good news that God loves me, desires a relationship with me, and sent his Son to die that I might live eternally with him.

In those days, there was only one black and white television in our house and only three channels to choose from. When the family gathered in the living room after supper, our viewing choices were very limited. The child sitting closest to the television served as the remote control, but the decision as to which program we watched was usually made by my father.

But when a Billy Graham crusade was on, Mama controlled the dial! 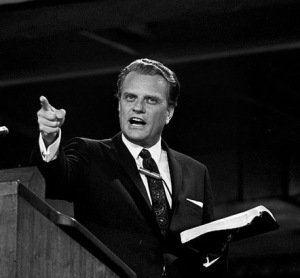 Much has been written since Graham’s passing about the estimated 215 million people who attended his crusades during his many years of public ministry. My wife and I were among the crowd when he preached in Tallahassee, Florida in 1986.

He has long been loved by people around the world, named to Gallup’s Top Ten Most Admired List last December for a record 61st time.

But his greatest personal impact on me occurred over fifty years ago, gathered with my family around that black and white television.

Billy Graham possessed exceptional oratorical skills and personal charisma, presenting the gospel with unsurpassed simplicity, clarity, and conviction. Like the Apostle Paul asserts in the verse that heads this post, he understood that his effectiveness as a preacher depended on the power of God working through a faithful servant.

In my lifetime, I don’t believe there has been a more faithful servant of God or anyone who made a greater impact for Christ. I can still picture the lines of people moving toward the stage at the end of each service as the choir sang “Just As I Am” and as he encouraged the crowd with two simple words, “You come.”

Mama never pressed us afterward about responding to that call at the end of each telecast. I think she trusted that in God’s perfect time and when our hearts were ready, each of us would eventually take that step of faith.

Years later, as he lay on his deathbed, Daddy placed his trust in Christ. Three years after that, I made my own public profession and was baptized at Florence Baptist Church in Forest City, North Carolina, not far from where I live now.

While God surely used many people and circumstances to bring us both to those fateful decisions, I’m convinced that none of them influenced us more than Billy Graham, whose messages had continued to resonate in our hearts.

Over the last week, I have been rereading my copy of his 2006 book, The Journey: How to Live by Faith in an Uncertain World, which includes a chapter titled Making an Impact. Recognizing how closely my teaching and writing over the past twelve years has so often echoed his own words from that book, it is clear that his impact on me continues to this day.

I invite you to share your own memories of Billy Graham and any impact he might have had on your faith journey.

As for me, I will be eternally grateful that whenever his crusades were being telecast in the days of my youth, Mama controlled our television dial.

“One of the Bible’s greatest truths is that we were not meant for this world alone. Death is not the end of life; it is only the gateway to eternity. … Some day this life will be over. I look forward to that day, because I know that beyond it is heaven.” – Billy Graham, The Journey