“Do not put your trust in princes, in human beings, who cannot save. When their spirit departs, they return to the ground; on that very day their plans come to nothing. Blessed are those whose help is the God of Jacob, whose hope is in the Lord their God. He is the Maker of heaven and earth, the sea, and everything in them – he remains faithful forever.” (Psalm 146: 3-6 NIV)

In recent days leading up to the inauguration of our new president, I have been reflecting quite a bit on these words of the psalmist. We do not know the specific circumstances which prompted his cautions against trusting in princes, but its implications are eternal. The Bible records numerous examples of Israel turning their backs on God while overly trusting in men. In spite of consistently devastating results, all too often we continue to make the same mistake. 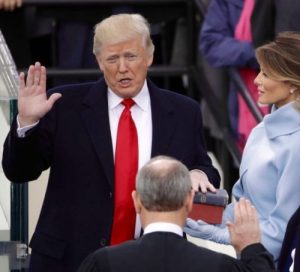 Eight years ago, President Obama came to office promising “hope and change” in the midst of widespread financial calamity and skyrocketing unemployment. While those conditions improved greatly during his two terms, our political divisions intensified. In his inaugural address yesterday, our new president made little attempt to heal those divides, instead employing exaggerated and dystopian rhetoric to describe an “American carnage” where our children are “deprived of all knowledge”.

Wherever you may stand in your views of Donald Trump or Barack Obama, we should all reflect on the words of Psalm 146, reminding ourselves that no matter how powerful and charismatic and no matter how convincing their rhetoric, trusting in man is a misplaced trust. Those eagerly counting on President Trump to make good on his promise to “Make America Great Again” as well as those who exceedingly fear him are both placing too much trust in the plans of men and too little trust in the overriding sovereignty of God, who alone “remains faithful forever”.

That is why I continue to abhor mixing religion and politics. Inevitably it takes our focus off of the only One who can truly save. As followers of Christ, when we overly involve ourselves in political endeavors, we risk the impact of our central message, the Gospel of Jesus Christ. Polls continue to reveal that the more vocal Christians have become in the political arena over the past several decades, the more negatively we are being viewed by the general public. That trend will likely be magnified by this divisive election.

As Christ’s ambassadors, we have been commissioned to spread a powerful message – a message too important and too life-changing to allow political involvement to threaten the impact of our witness. Our Lord is still “able to do immeasurably more than all we ask or imagine, according to his power that is at work within us.” (Ephesians 3:20 NIV)  If more of us would lend the same enthusiasm and energy to spreading that message as we bring to spreading our political messages, the collective impact on future generations of that “hope and change” might astound us all!

“The church works best as a separate force, a conscience to society that keeps itself at arm’s length from the state. The closer it gets, the less effectively it can challenge the surrounding culture and the more perilously it risks losing its central message.” – Philip Yancey, Vanishing Grace